What franchise buyers need to know about mobile territory planning

More and more mobile franchises are coming onto the market, such as a business flying drones, or one taking mobile video games to kid’s parties. What’s appealing to franchisees is the lower cost of entry, along with not having the hassle of a retail lease.

A potential client rang me the other day and said he and his wife were looking at going into a mobile franchise relating to the health and fitness industry. He said the franchisor had given him a territory, and could we do some work to decide if it made business sense.

Well, while I feel I am reasonably astute in these areas, my first question was what did your franchisor tell you in the disclosure document, and what are the basic assumptions about the market and specifically the brand and business you are becoming part of?

The answer was very little.

This seems to me to be a common problem, especially with small franchise systems, where the potential franchisee sits between a franchisor telling them enough to raise interest, and trying to avoid saying anything of substance in fear of later recriminations (legal), if there is a problem.

My view is if some logical work and assumptions have been formulated by the franchisor, then there is a reasonable case to give a territory with a realistic explanation, not just “This should work great, but don’t ask me how we came to that conclusion”.

How big is the market in the franchise territory?

As a potential franchisee, you are predominantly interested in your own market and probably not other capital cities where the franchisor may operate. For this example let me consider we are in the automotive aftermarket business. Maybe we are joining a system doing vehicle servicing as a mobile franchise.

The first question is always, how big is the market? Let us imagine we are going into business in an area of Melbourne – so we can visualise.

On a world-wide and national basis, if we undertake some research, we may find a report that predicts the Australian market is expected to be $40m. This may be able to be broken down to state level, and ultimately to specific areas.

The franchisor should have a business plan that addresses issue like total market size and forecast market share, and a good understanding of where the opportunities lie for the business. The franchisor and their advisors have decided that they feel with their mobile System, they will target to be 30 per cent of the market, or an anual Melbourne and Geelong market of $7m.

Now we are starting to understand the market.

While you may dispute the detail, at least we are gathering an understanding of the big picture, so now we need to understand:

In your due diligence (fancy wording for doing your own investigations to decide whether you proceed or not) you have every right to ask the franchisor to convince you that what they are putting before you is reasonable. Information such as the above is available, and should probably be included in the disclosure document, that is an obligatory right that you have to receive.

It does surprise us at times how some franchisors come to us for territory planning advice, and when we ask what is in their business plan and what the assumptions as far as market size and market share, there is a blank look.

In our view a franchisor should consider the question of territory numbers in one of three ways: 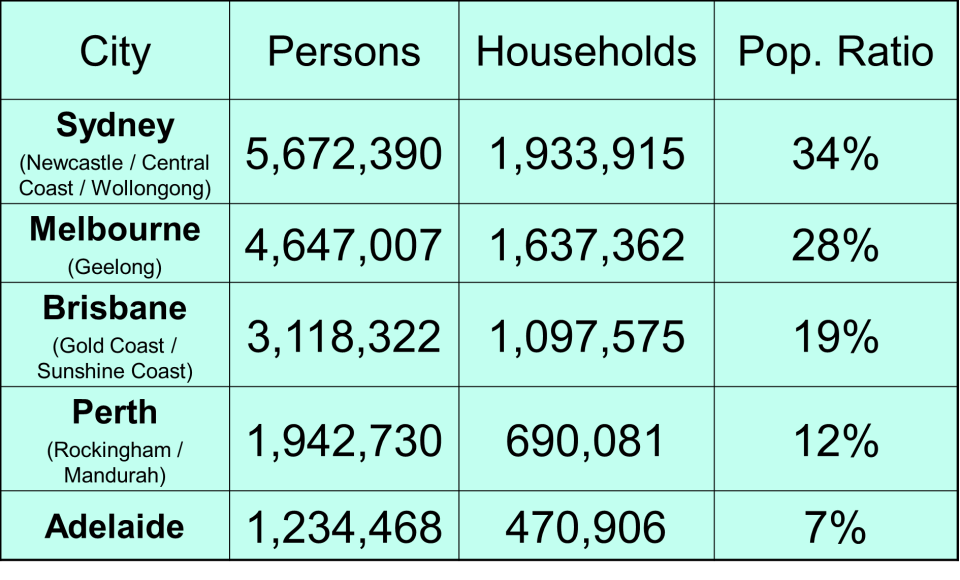 Here is a table showing how  you can compare the major capital cities in Australia based on the 2016 census population estimates.

Whichever way it is put to you by the franchisor, you should expect to see realistic assumptions, facts and data to support this view.

Once a franchisor has undertaken reasonable research, they should be able to show you a logically thought out set of information with mapping to back it up.

What you should ask the franchisor

If you are looking at taking on a mobile franchise, ask the franchisor what research it has done.

More importantly, find out what assumptions are being made in the process of allocating your territory, and whether it has a reasonable chance of sustaining the business.

If the answer is cloudy or blank, may I suggest either refer the franchisor to a company such as ours or look at another franchise system.

OzSpy shakes up franchise model to be more flexibl...

Retail chain OzSpy has given its franchise model a big shake...

Four stores delivering a $1million+ revenue each – it&...

Casual dining chain Motto Motto continues to innovate with i...